The Tray Launcher is our first project that has been published to PyPI. It makes management of Windows BAT files easier, condensing them into a single menu in the system tray instead of having many terminals cluttering the taskbar. The project was Mingyu’s idea, and the first programming work was done by Kate Sheldon, who was a high school student at the time, with guidance from Ganden Schaffner. Kate made a solid software foundation that Huaxu Dan, a first-year undergrad at UCSB, built upon to get to the point where the software was reliable enough for a public release. Currently the software is on version 1.0.7. The code is available here on GitHub. 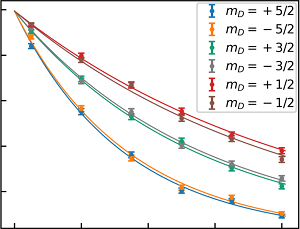 Mingyu Fan led a team to realize the first excited state lifetime measurement in the radium ion. The measured lifetime is in good agreement with theoretical calculations and will enable calculation of the differential scalar polarizability of the narrow linewidth optical clock transition. Craig and Asad helped to build and operate the experiment, and undergraduates Chaoshen and Sam made made key contributions to stabilizing laser powers. The Article describing this work was published today in Physical Review A, and is also available on the arXiv. 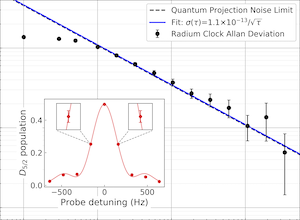 Craig Holliman led a team, including collaborator Sam Brewer, to realize the first optical clock based on the radium ion. Radium is a famously unstable element, so it is a bit ironic that our group has made a high-stability clock using one of its optical transitions. But, looking more closely the radium ion has appealing features for a trapped ion clock. The wavelengths for working with trapped radium ions are very user-friendly: all of the necessary transitions could be addressed with low optical powers using integrated photonic sources. This makes the system promising for a compact and low-power optical clock. The ion’s high mass is good for addressing some of the leading issues with optical clocks. In the future when we begin working with radium-225 there will be built-in insensitivity to nefarious magnetic field noise through the isotope’s particular electronic structure. A radium ion clock could also be used to constrain the time variation of fundamental constants. The Letter describing this work was published today in Physical Review Letters, and is also available on the arXiv. 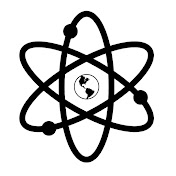 It was an honor to represent our group and present our work for the Virtual Atomic, Molecular, and Optical physics Seminar series (VAMOS). In the talk, “Radium ions and cold radioactive molecules”, I discuss our recent radium ion measurements, our progress with radium-based molecules, and some of the motivations for our research, as well as our plans moving forward. The post talk discussion (not recorded) with students, postdocs, and a few P.I.’s was a highlight - lots of fun ideas were explored! Thank you to the VAMOS organizers for giving me this opportunity.

Radium monomethoxide in the news
29 Mar 2021

The work by Nick Hutzler and Phelan Yu on RaOCH3+ (radium monomethoxide) and its potential to address the mystery of the Universe’s matter-antimatter asymmetry was featured in an article on phys.org. 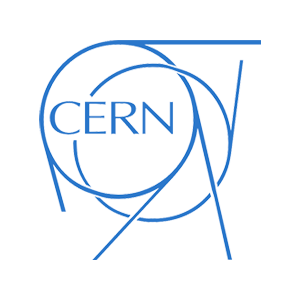 Graduate student Mingyu Fan gave a seminar to CERN’s ISOLDE Physics Group. ISOLDE has made seminal measurements on radioactive molecules, in particular RaF. They were happy to hear about Mingyu’s recent paper where we demonstated the controlled production of cold, trapped radioactive molecules. 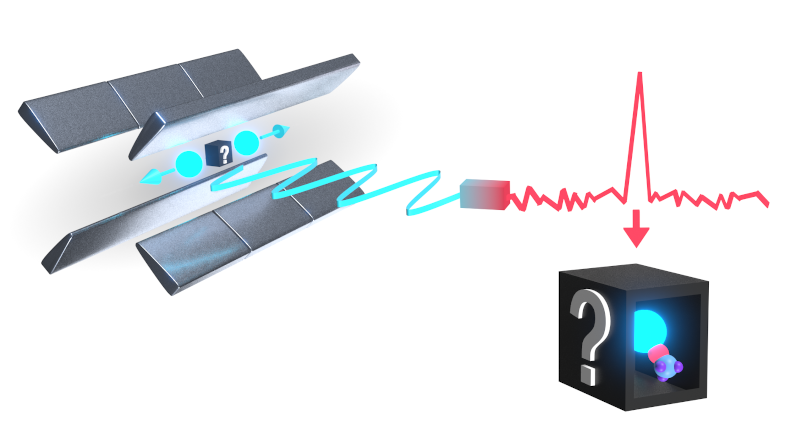 Our work on the controlled synthesis and detection of radioactive molecules was published today in Physical Review Letters. In the paper we demonstrate a new all-optical technique for identifying trapped ions by their mass in an ion trap. The technique, optical mass spectrometry, has several advantages: it is non-destructive and fast. We applied the technique to detect the synthesis of radioactive molecules that are exceptional sensors for addressing open questions related to time symmetry violation.

The paper was the culmination of an incredible process that started with grad student Mingyu Fan one day noticing that the trapped ions he was working with were excited to large motional states if he changed one of our laser’s frequencies by a small amount (~10 MHz). We discussed and I encouraged Mingyu to explore what he had stumbled upon by chance. In short order Mingyu had figured out how to convert a signal from the amplified motion into a mass of the trapped ions. Mingyu then worked out the mechanism behind the motional amplification (see the paper for an explanation). We then decided to apply this new ion identification technique to radioactive molecules, which we were confident we could make, but didn’t have a great means to confirm production until this point. Mingyu and Craig produced RaOH+ and RaOCH3+ by reacting trapped radium ions with trace quantities of methanol that was controllably leaked into the vacuum chamber. These molecules are great for addressing a pair of old and pressing problems: first, how is it that there is a massive imbalance between matter, which is abundant, and antimatter, which is practically nonexistent, in the Universe - the Baryon asymmetry problem, and second, why does quantum chromodynamics seemingly preserve charge conjugation and parity symmetry, known as the Strong CP problem.

The figure, by Max our resident artist, is a depiction of optical mass spectrometry where a pair of bright laser-cooled radium ions surround an unknown dark ion. Photons (teal) are detected and converted into a signal (red) that tells us the mass of the unknown ion.

In addition to using optical mass spectrometry with radium and radioactive molecules, a team led by undergraduate Xiaoyang Shi applied the technique to identify the four stable strontium isotopes in the significantly different environment of a high frequency ion trap. It was great to have so many people in the lab and to utilized both of our ion traps for this work. I was also happy that Xiaoyang was able to get data with the trap he built before he graduated - he has since started physics grad school at MIT.

The motivation to produce RaOCH3+ stemmed from a conversation in the fall of 2019 with Nick Hutzler. Later, Nick and graduate student Phelan Yu started working on a paper about this molecule for its potential sensitivity to new physics. It was special to submit our paper jointly with Nick and Phelan’s work to PRL, and go through the review process in parallel with them. Our papers were both featured as Editor’s Suggestions, and Ronald Garcia Ruiz wrote up a very nice APS Physics Viewpoint article about the letters.

The work was also featured in the UC Santa Barbara Current in an article by Harrison Tasoff - Enlightening Dark Ions.

In the lab we’re hard at work on the exciting next steps! 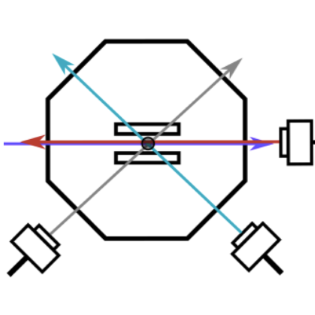 Great news, the lab has now had its first set of UC Santa Barbara undergraduates on a publication that came out today in PRA. The work measured a specific transition in Ra+ to resolve a discrepancy between previous values by means of directly driving the transition in question. Grad student Craig Holliman spearheaded the entire effort, really leading the others scientists on the paper. As an advisor it was great to watch Craig take full ownership of this experiment, organize people to configure the experimental setup, write code for data taking, take the data, and perform the data analysis. Undergrad Michael Straus made critical contributions to the data analysis, and undergrad Asad Contractor was instrumental in setting up the experiment, taking data and helping refine the manuscript that Craig wrote.