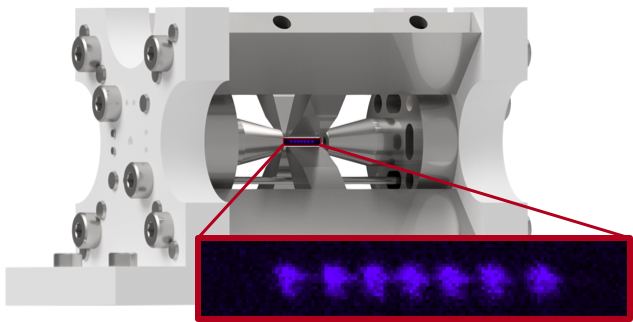 Undergraduates Xiaoyang Shi and Michael Straus baked the ion trap to reach low pressures and were able to rapidly make the first Coulomb crystals in the lab’s second ion trap. To bake the system they took the entire trap off our optics table and placed it in a special oven. They then carefully ramped up the temperature and left the system pumping at high temperature. While the system was baking Xiaoyang and Michael improved the laser systems and experimental controls so that when the bake was finished they would be ready to go. To get back to trapping they had to move the system back to the optics table and set up the lasers that address our atoms. The image at right is a composite of a picture of 7 individual atoms that have been trapped and laser cooled and a computer rendering of the high-frequency trap used for this work. You can see where the ions are trapped in the center between all of the trap electrodes. Xiaoyang is now increasing control over the trapped ions by improving electronic, software, and laser hardware. Michael is setting up the 674 nm optical qubit laser and cavity for laser stabilization - a significant undertaking for a Sophomore.