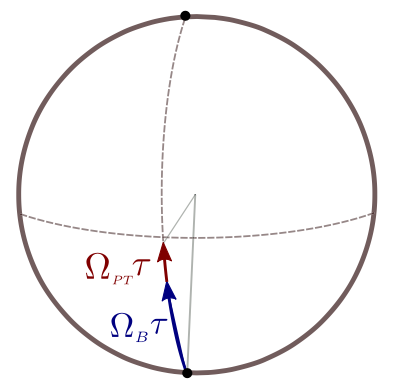 In collaboration with Amar Vutha and his student, Mohit Verma, we worked on a new proposed permanent electric dipole moment (EDM) measurement technique that was published today in PRL. EDMs are at the forefront of the search for new physics beyond the Standard Model of particle physics to explain several major open issues, including the Universe's lack of antimatter. In the early history of the Universe matter and antimatter were created in nearly equal quantities, recombined and annihilated (this is what happens when matter and antimatter collide), and a bit of matter was left over, ultimately the material that we are made of. The known laws of physics are not enough to explain this excess of matter over antimatter, and thus we need to look to new physics to explain this discrepancy. One of the conditions for this is new physics that violates time symmetry. When time symmetry is broken a system looks fundamentally different if we reverse the arrow of time. Permanent electric dipole moments violate time symmetry, but so far no EDMs have been found. A brief aside: the electric dipole moment of molecules is not a permanent electric dipole moment, it is an electric dipole moment that has been induced by applied electric fields and does not violate time symmetry. Measuring an EDM would be a clear sign of new physics, and has motivated many searches worldwide for them in systems such as neutrons, atoms, and our personal favorite: molecules. Amar had the brilliant idea that we could utilize special molecular states that are insensitive to magnetic field noise, so-called clock states, and that this would extend the reach of EDM searches to wide classes of molecules that can be prepared with exquisite control. In our group we are really excited to apply this technique to single molecular ions that are highly sensitive to new physics, such as RaOCH3+. The technique should be straightforward to implement in an ion trap where we can apply the requisite control voltages (a small voltage due to small size of the ion trap) on the trap's end cap electrodes. For a great talk on the proposed technique watch Amar's talk at FSQT.