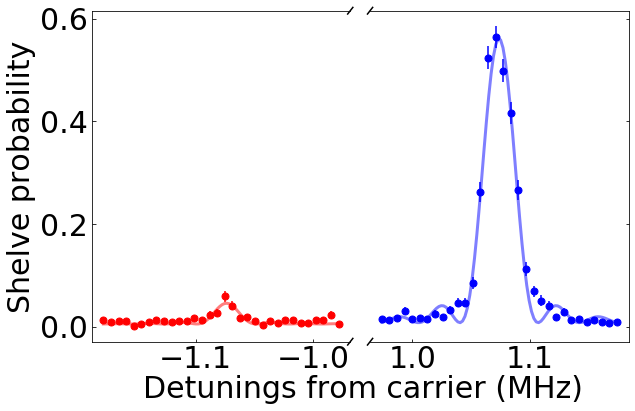 Laser cooling micro-mechanical systems to bring them into the quantum regime was the focus of my graduate work in Jack Harris’s group. This involved a 3He fridge that pre-cooled a mechanical membrane to ~400 mK, a high-finesse optical cavity, and coupling free space light through 6 feet of half inch diameter tubing. We were able to use resolved sideband laser cooling to remove all but a handful of quanta. After I graduated, the group made several improvements and cooled to the quantum ground state.

Fast forward to early 2020 and my long-standing dream of ground state cooling is realized by UC Santa Barbara undergraduates Xiaoyang Shi and Michael Straus. When Xiaoyang joined the lab he was tasked with building an RF resonator for a an ion trap. This quickly escalated into Xiaoyang designing and then developing a high frequency ion trap (who else was going to do this work?). Michael joined the project and was charged with making an ultrastable laser for addressing the strontium ion’s optical clock/qubit transition. Over the span of a few short months Michael put together the optical elements to couple light into the cavity and assembled the electrical circuit to realize a PDH lock and stabilize our laser for addressing strontium’s narrow optical clock transition. Over the next several months Xiaoyang and Michael were able to put all of this together with numerous other improvements to our control systems and our understanding of trapped ions. After several attempts and efforts debugging they optimized the system’s parameters and were able to remove the last motional quanta from a single trapped atom, cooling it to its motional ground state. The phonon occupancy is evident in the asymmetry between the red and blue sidebands in the plot - the red sideband is small because the atom lacks phonons. The work was primarily done by Xiaoyang and Michael, but they benefited from assistance and valuable discussions with many in the lab, in particular Mingyu and Xinghua. This is very impressive work for a pair of undergrads that were juggling a full course load, applying to grad school, etc., and more importantly, it is a great starting for our next experiments in the quantum realm.