Radium cooled to its motional ground state!
29 Sep 2020 by amj 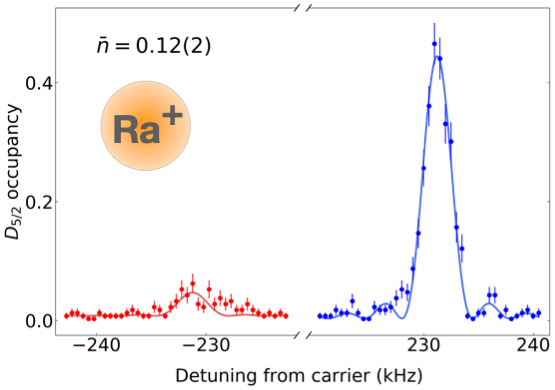 In only a couple of years since they realized the first laser cooling of radium ions graduate students Mingyu Fan and Craig Holliman have now cooled radium to its quantum ground state of motion. This is an incredibly exciting starting point for many new research directions with this very heavy atom. Ground state cooled radium means they have essentially full control over the ion, with the ability to very accurately measure the system, or now use phonons, the quantum of motion, to control or readout other co-trapped atoms or molecules. One remarkable aspect of this result is the trap in which the cooling was done: the trap was specifically designed for the first laser cooling and spectroscopy of radium, and the creation of radium molecules, it was in no way designed for cooling to the motional ground state. You can see this in the figure where the motional mode that is cooled is only around 230 kHz where typical ground state cooling happens with motional frequencies around 1 MHz or higher in traps that are much smaller (see our ground state cooling working with the lighter strontium ion). The trap dimenions are r_0 = 3 mm and z_0 = 7.5 mm (the characteristic distances from the radial and axial electrodes to the ion) - this is a very large ion trap by quantum information science standards. The figure shows the probability that the ion can be driven to excited state by light at 728 nm while simultaneously adding or substracting a motional quantum. The small red peak shows that no more phonons can be removed from the system as the average ground state occupancy is 0.12 total phonons. This work was assisted by UC Santa Barbara undergrad Asad Contractor who recently joined the project and is already working on implementing an advanced ground state cooling scheme. With ground state cooled radium Mingyu, Craig, and Asad are actively working on quantum state engineering to further advance the lab's capabilities.